Gin lovers who may be nostalgic for a special product from the '90s will be glad to hear Tanqueray is bringing back its Malacca gin.

Malacca was introduced in 1997, but ceased production in 2001. That was to the disappointment of some leading cocktail experts, who liked the fact the lower-alcohol product was softer and with fewer juniper nuances than the popular London Dry style and, thus, was more versatile in mixed drinks.

The return of Malacca in February is for "a limited run" will carry a suggested retail price of $33 for the 750ml bottle.

By way of explanation "limited run," the company has created just 16,000 cases for the U.S. UK and Western Europe markets.
Posted by William M. Dowd at 12:58 PM No comments:
Email ThisBlogThis!Share to TwitterShare to FacebookShare to Pinterest

• From The Associated Press


HARRISBURG, PA -- Gov. Tom Corbett is expected to call for auctioning off wine and liquor store licenses and opening beer sales to a broad array of retailers including supermarkets and convenience stores, according to information from people briefed by the governor's office Tuesday.

The plan would dramatically liberalize the sale of alcoholic beverages in Pennsylvania and throw out Prohibition-era limitations that have thus far withstood the efforts of three straight Republican governors.

Corbett's office said the Republican governor will announce his plan Wednesday afternoon in a Pittsburgh state office building. His spokesman, Kevin Harley, declined to comment on the details ahead of the governor's announcement, but he said it would be a "bold" plan.

"He believes Pennsylvanians should have choice and convenience in purchasing beer, wine and liquor, the same convenience that is afforded to residents of 48 other states," Harley said.

According to information from people briefed by the governor's office, the plan involves shutting down the more than 600 state-owned wine and liquor stores as a prelude to auctioning 1,200 wine and liquor store licenses. The information was provided by people on condition of anonymity because they did not want to be named providing details before the governor announces them.

Harley said a bill reflecting Corbett's plan will be introduced in the near future.

Wendell W. Young IV, the president of the union that represents about 3,000 unionized state store clerks, said Tuesday that privatization of wine and liquor sales would diminish consumer choice and state tax revenue while raising liquor consumption rates and the crime and health problems that follow.

"Why would we want to be like the 48 other states when we're already so much better than them?" Young questioned.


Posted by William M. Dowd at 12:57 PM No comments:
Email ThisBlogThis!Share to TwitterShare to FacebookShare to Pinterest 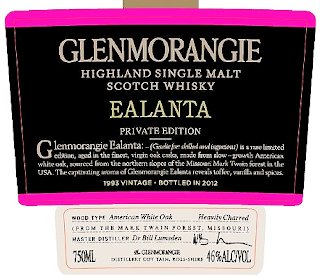 Dr. Bill Lumsden is at it again. The director of whiskey creation for the Scottish distiller on Tuesday announced the launch of Glenmorangie Ealanta, the latest addition to its "Private Edition" range.

Ealanta -- Scots Gaelic for "skilled and ingenious" -- is a 19 Years Old Glenmorangie, matured in virgin American white oak casks from the Mark Twain National Forest in the Ozark Mountains of Missouri. (Go here for a visit Lumsden and I paid to that area several years ago as I followed the "wood trail" for whiskey again.)

"It's no secret in our industry that it's the wood that makes the whisky," Lumsden said, "and for many years my team and I have been carrying out detailed research in this area."

Glenmorangie typically employs used whiskey barrels to age its whiskies, so the use of new white oak casks is a different approach.

"The interaction of our elegant spirit from our very tall stills directly with this virgin wood makes for many intriguing flavors," Lumsden said. "Using virgin oak casks that have been heavily toasted adds huge mouth-filling, buttery, creamy, vanilla flavors -- somewhat like a creme brulee topped with almond and marzipan. This makes for a lovely rounded and complex expression of Glenmorangie. New wood also imparts a purity of flavor that I think many Glenmorangie aficionados will find an interesting divergence from our previous Private Edition releases."

Glenmorangie Ealanta is bottled at a strength of 46% alcohol by volume (92 proof) and is non chill-filtered. It will be available in limited quantities in the U.S. market. The distiller did release a suggested retail price. However, it is priced at 99.95 Euros, which converts to $132 in U.S. currency.
Posted by William M. Dowd at 1:32 PM 2 comments:
Email ThisBlogThis!Share to TwitterShare to FacebookShare to Pinterest

Don't be surprised at the number of new whiskey expressions coming out of Ireland this year.

In support of a national tourism program called "The Gathering" -- which includes visits to Ireland as well as consumption of Irish products as part of a bid to help the nation's struggling economy, the distillers will be doing their bit.

The single malt portion of the blend spends a minimum of 14 years in the bourbon barrels. It is combined with more Irish single malt aged in casks specially infused for Knappogue Castle with Oloroso sherry.

Knappogue Castle is named after the 15th Century structure in western Ireland bought by Mark Edwin Andrews II, who restored it in the 1960s. In the process, he amassed a large collection of rare pure pot still whiskey; that he eventally bottled and labeled Knappogue. The last of the collection, labeled Knappogue Castle 1951, is the oldest and rarest Irish whiskey in the world, and still available for by special order.

Knappogue Castle Twin Wood 14 Year was bottled last October. It is non-chill filtered and bottled at 92 proof. The suggested retail price is $119.