Drop in for a short one 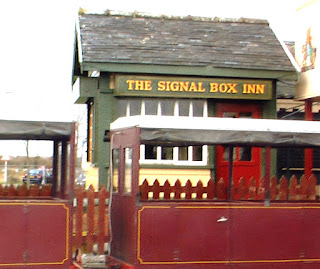 At the risk of making the maddening Disney song echo for hours in your head, it's a small world after all.

Last summer I wrote an item about a 64-square-foot former railroad signal box structure in Cleethorpes, England, that had earned the title of the world's smallest pub.

The other day I received an envelope containing a note, a letter and some photos. The note, from Frances Hynds of Delmar, NY, informed me she and her husband, Given, had met a couple from Cleethorpes while on a cruise and had struck up a continuing correspondence. "I sent your article, and I have enclosed their reply," she wrote.

The reply, from Mary Keeble, said in part: "I couldn't believe it when I read about the small bar in Cleethorpes. We went to look for it and found it. I thought I would take some photographs ... . The pub is a small signal box on the light railway that runs near our promenade. It is very good." 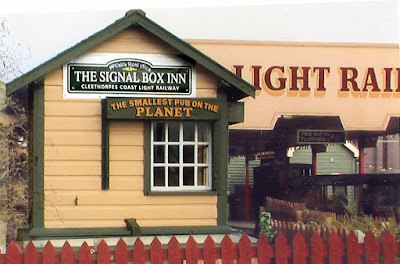 Thank you, Frances, and thank you, Mary.

The spirits world -- the drinking kind, not the "Boooo!" kind -- is raising a glass to the latest sales figures released by the Distilled Spirits Council of the U.S.

DISCUS says gross revenue for U.S. spirits hit $17 billion in 2006, up about $7 million from the previous year.

Other DISCUS numbers for 2006 compared to the previous year:

• Spirits volume rose 3.8% and the sector gained domestic market share for the fifth year in a row.

Much of the world knows Chile for its wines, but beer and spirits are doing much better with Chilean consumers.

According to the leading newspaper, La Tercera, "Domestic pisco and wine consumption fell by 10 and 8 percent, respectively, in 2006. The dip marks the first decrease in either industry since 2002. Beer and hard liquor sales, traditionally a small market factor, saw dramatic increases."

Specifically, liquor sales rose 25% and beer sales 15% . Non-alcoholic beverages also saw a sharp market jump. Purified water grew by 60 percent and energy drinks, though a fraction of the market, grew by 124 percent. Chilean companies specializing in other drinks, says La Tercera, have begun taking advantage of the liquor trend by importing and distilling their own liquors, primarily rum.

Non-alcoholic beverages also have seen an increase in sales -- soft drinks by 5%, purified water 60% percent and energy drinks, though a fraction of the market, 124%.

Pisco continues to be claimed by both Chile and Peru as the national drink. It is a style of brandy: i.e., a liquor distilled from grapes and most widely consumed in Chile, Peru and Bolivia.

It's not quite in the same realm as airline-sized mini-bottles or cheap flasks favored by hoboes, but it might have had its origins there. A new product called Pocket Shot is a shot-at-a-time line of liquors in hard-to-break soft pouches. The San Jose, CA, manufacturer packs 'em up at 120 units per case (10 sleeves with a dozen 50-milliliter units per sleeve). The 80-proof liquors come in vodka, rum, tequila, whiskey and gin.

It's confined to Pennsylvania and New Jersey at the moment (unless you call 800/308-2600 for ordering assistance), but Bluecoat may be getting in on the U.S. gin revival at an opportune moment. The five-times-filtered American Dry Gin prodiuct just being rolled out uses organic juniper berries for its basic flavor profile. Thereafter the herbal ingredients are proprietary although it's obvious there is a mix of citrus nuances. The manufacturer, Philadelphia Distilling, notes, "The remaining botanicals are also organic, contributing to all natural flavors without outside influences."

At one time lychees, or "lychee nuts" as some people erroneously call them, were confined to occasional use at offbeat Chinese restaurants. But, with the global revolution in food availability, they're fairly accessible. Thus, we have Lichido, a French liqueur made primarily from the Asian fruit. However, lychees (also spelled lichees and a few other ways in various countries) are not boldly flavored, thus the addition of cognac, guava, peach and vodka in the drink.

And, far removed from such sweetish tastes, we have Perique, a liqueur based on the Louisiana Perique strain of spice tobacco often used in Virginia blend cigarettes. It was created by Ted Breaux, known most widely for his absinthe concoctions. It's 62 proof, and available in very limited quantities.

If you've always wanted to own your own vodka label, start gathering up your rubles.

Of course, Mother Russia isn't trying to rid herself of the iconic names. The winning bidder(s) will get the right to use the brand names, not own them outright.

Currently, all three brands are involved in legal battles over use and licensing rights abroad, so whoever wins the bids for the names may also be winning a lot of headaches, especially considering that overall sales are down significantly for the brands. 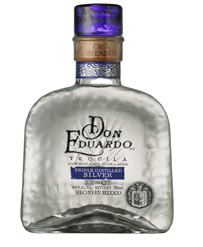 Mexico is on the threshold of the biggest boom in the four-century history of mass producing tequila.

Don Pedro Sánchez de Tagle, the marquis of Altamira, began mass-producing tequila around AD 1600 in what became the state of Jalisco, the center of today's tequila industry.

Distillers racked up record levels of both production and exports in 2006, according to the Tequila Regulating Council. By law, tequila can be made only in Mexico even though it can be shipped out in bulk and bottled elsewhere. They exported 37 million gallons in 2006 (28 million of it to the U.S.), up nearly 20% from the previous year, and overall produced 64 million gallons, a nearly 16% increase.

What we have here is not merely a statistical game. The level of quality also has been amped up by distillers at various levels, with more and more of them producing a range of products beyond the basic level. Thus, the competition for retail shelf space among a growing number of tequilas in the añejo and reposada categories that carry higher prices has begun, just as vodka has been doing for the past decade as part of the tremendous increase in brands and styles.

Not long ago, holding a tequila tasting was rather simple. The range of choices was small, the manufacturers comparatively few in number. Now, thanks in large part to the thirst of American consumers, tastings need to be held more frequently just to keep up with the field.

My preference in any sort of spirits sampling is for small-range tastings of four or five styles which allow the palates of the tasters to zero in on what is being tried rather than risk being deadened by abundance.

Thus, I put together a quartet of 80-proof pure blue agave tequilas that offer a significant range of characteristics.

• Sauza Hornitos: This pale gold tequila is a reposada from the same distiller that produces Tres Generaciones. It's rested for three months in American oak barrels, which tends to smooth out the middle notes and balance the complex tastes somewhere between pear and a slight spice.

• Don Eduardo Silver: This triple-distilled liquid is made from estate-grown blue agave, like all tequilas produced by the Orendain family. It has a slight and pleasing floral nose, an oiliness that is very smooth on the tongue and palate, with enough body to linger pleasantly even when sipped over an ice cube or two.

• Gran Centenario Plata: Soft, herbal from resting a month in white oak barrels and dry middle notes. Hints of cinnamon and other soft spices run throughout.

• Corazon: The reposada version is twice-distilled in pot stills and rested for up to a year in charred new oak barrels. It's sweeter than the average reposada, which makes it perfect for comparative sampling.

Of these four, and even compared to sense memories from other tequilas tried at other times, the Don Eduardo comes out of top for me. I find it a delightfully complex distillation that lends itself to both straight sipping and in cocktails, the latter as long as they are not overwrought with so many sweetners and intruding ingredients that they drown out the subtleties of the tequila itself.

The result of this four-tequila tasting didn't surprise me. I had visited the Don Eduardo agave fields and distillery several months ago for a field-to-bottle look at the Orendain enterprise. I was so impressed with several sampling sessions of the various Don Eduardo distillations I purposely held off doing any comparative tastings for fear the hospitality extended during the visit would unduly influence my opinion.

From a distance of months, this seemed a good time to see if Don Eduardo held up. Without question, it did.

Just as true champagne can only be made in Champagne, France, true tequila can only be produced in the state of Jalisco and a few adjacent areas of Mexico and must meet stringent government regulations. It is made in two general categories:

• Tequila 100% Agave -- Must be made only with the juice of the blue agave plant and must be bottled at the distillery in Mexico. It may be Blanco, Reposado, or Añejo.

• Tequila -- Must be made with at least 51% blue agave juices. It may be exported in bulk to be bottled in other countries following the NOM standard. It may be Blanco, Gold, Reposado, or Añejo.

• Blanco, or Silver -- The traditional tequila. Clear, transparent, fresh from the still. Must be bottled immediately after distillation process. Traditionally served in a two-ounce glass called a "caballito."

• Oro, or Gold -- Modified by adding colorings and flavorings, caramel the most common. Widely preferred for frozen Margaritas.

• Reposado, or Rested -- Kept in white oak casks or vats called "pipones" for two to 11 months. Much mellower than blanco or oro, pale in color, gentle bouquet.

• Añejo, or Aged -- Matured in white oak casks for a year or more. Maximum capacity of the casks should not exceed 159 gallons. Amber color, oak notes.

• Reserva -- Not technically a category, but recognized as an Añejo aged in oak up to eight years.

The debate now is whether extremely aged tequila is really tequila at all. Made from blue agave, true, but the aging of what traditionally has been a young spirit and the use of various barrels flavored with bourbon, sour mash or sherry in that aging process is, in the view of some, transforming such tequilas into a different product entirely.