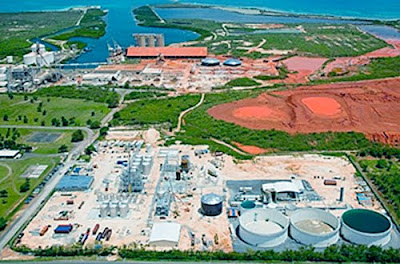 Diageo photo
Some time back, I reported on the progress of a new distillery being built on St. Croix in the American Virgin Islands. This week it officially opened.

Gov. John de Jongh and other politicians from the U.S. Virgin Islands, of which St. Croix is one, on Tuesday joined executives from Diageo PLC at a ribbon-cutting ceremony for its new Captain Morgan Rum distillery.

The new distillery, the governor said, "will not only reinvigorate our local rum industry but also will serve as a major economic engine for the territory," noting it is expected to generate more than $100 million annually in revenue for the islands over the next 30 years.

The project was not without its controversy, and not as one might think from the formerly lone rummaker on the island, Cruzan. Instead, politicians from neighboring Puerto Rico, which is not part of the Virgin Islands, have been expressing extreme unhappiness at the loss of jobs that had been on their island because a distillery there had been making Captain Morgan under contract.

You can get the rundown on the whole flap by clicking here.

To Dowd's Wine Notebook latest entry.
To Dowd's Tasting Notes latest entry.
Back to Dowd On Drinks home page.
Posted by William M. Dowd at 5:22 PM No comments:
Email ThisBlogThis!Share to TwitterShare to FacebookShare to Pinterest 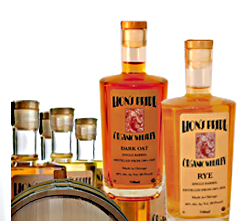 Koval Distillery photo
Al Capone would have been so proud. Well, sort of.

The Prohibition-era bootlegger, who made his headquarters in Chicago,  made his fortune by not paying taxes on booze. Now, the first legal whiskey made in the Windy City since that period is on the market.

Once past New Year's Day, Lion's Pride Organic Whiskey will become available beyond the immediate Chicago area where it has been on the market for several weeks.

It is distilled at Koval Distillery in Ravenswood, north of the city and halfway between it and Evanston. It was named for Lion Birnecker, son of Kobal owners Sonat and Robert Birnecker.

The single-grain expressions are available in rye, oat, dark rye and dark oat at $48.00 for a 750 ml bottle.

Koval also utilizes its copper still to produce a line of vodka and such liqueurs as rose hip, ginger, chrysanthemum, jasmine and coffee.

To Dowd's Wine Notebook latest entry.
To Dowd's Tasting Notes latest entry.
Back to Dowd On Drinks home page.
Posted by William M. Dowd at 5:13 PM No comments:
Email ThisBlogThis!Share to TwitterShare to FacebookShare to Pinterest 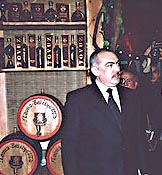 ABC photo
The former Soviet Union republic of Azerbaijan is about to become the first whiskey producer in the Caucus region of Central Asia.

It plans to finish 15,000 bottles by the end of this year, and "the future will depend on market reaction to our new product. At the same time, German businessmen have already expressed interest in whiskey of our production. They say that there is demand for such output."

Tovuz-Baltia already exports 80% of its other output to European Union and and Commonwealth of Independent States markets in Europea and Asia. Only 20% is sold in-country.

The company was founded in December 1989 and focuses primarily on the cultivation of grapes and the production of wine and wine products such as cognac. However, Tovuz-Baltiya has recently introduced new technology and is producing fruit- and berry-based wines and spirits.

"We decided against bringing spirits from Ukraine, Iran and Russia and are producing vodka with our own raw materials. We have started the production of a new brand of alcohol from watermelon, quince, pomegranate and other fruits," Mammadhasanov said.

Posted by William M. Dowd at 4:57 PM No comments:
Email ThisBlogThis!Share to TwitterShare to FacebookShare to Pinterest 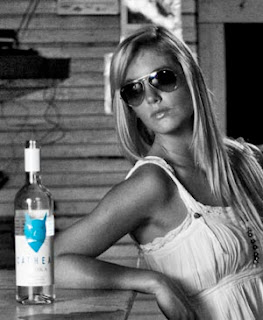 Come January 2011, though, a pair of young entrepreneurs in Gluckstadt, Madison County, plan to  begin operations as the state's first legal distillery.

Cathead Vodka will be made there by Austin Evans and Richard Patrick. They opened the facility earlier this year and have been using it to distribute their corn-based vodka which currently is being made out of state.

The legal process "took us about three years," Evans told the local Madison County Journal. "We've been studying the law books and the people at the ABC (Alcohol, Beverage Control) have been real helpful to us."

Cathead isn't the only alcohol-producing facility in the state, but it is the first distillery. The Lazy Magnolia Brewing Company in Kiln brews Southern Pecan brand beers, the Old South Winery in Natchez produces muscadine wine, and a third facility produces wine in Louisville.

To Dowd's Wine Notebook latest entry.
To Dowd's Tasting Notes latest entry.
Back to Dowd On Drinks home page.
Posted by William M. Dowd at 4:47 PM No comments:
Email ThisBlogThis!Share to TwitterShare to FacebookShare to Pinterest

Under Master Distiller Chris Morris, the line (once known as Labrot & Graham) has a strong commercial following. A new example of his Master's Collection -- Woodford Reserve Maple Finish -- will do nothing to harm that status. It is perhaps the best Woodford I've ever tasted.

Although I like Woodford in a cocktail, I find its finish a bit too sharp when tasted straight. The new wood finish of this version -- the industry's first bourbon to be finished in barrels made from toasted sugar maple wood after the standard aging in charred new white oak -- takes care of that, adding a sweet earthiness to both the nose and the finish: honey, spice and maple all creating a pleasing bouquet.