A statement from Angel's Envy, which Henderson came out of retirement in 2006 to help launch for Brown-Forman, said Henderson had died. It did not mention a cause of death.

A statement from Brown-Forman said Henderson worked for the company nearly 40 years and was a "titan of the Kentucky bourbon industry." It said he tasted more than 430,000 barrels of bourbon to determine whether they were ready for bottling.

Henderson was an inaugural member of the Kentucky Bourbon Hall of Fame.
Posted by William M. Dowd at 12:07 PM No comments:
Email ThisBlogThis!Share to TwitterShare to FacebookShare to Pinterest

Absolut, like just about every vodka manufacturer, has a loooong line of flavored spirits to keep up with the incredibly competitive market.

Its latest release, however, is an offbeat one: Absolut Amber, aged in a variety of woods.

The company began limited U.S. distribution in April, but now says it will roll it out across North America by the end of this month.

Absolut Amber is an 80-proof (40% abv) vodka that has been aged for a minimum of six months with a variety of wood, including ex-bourbon barrels, American oak and Swedish oak.

To kick it up even more, a variety of roasted American and French oak chips is added to the aging barrels.

"Absolut Amber will create a whole new category of spirits and has been developed to appeal to vodka, whiskey and rum drinkers,” a company spokesperson told The Spirits Business.

However, it must be noted that this is not the first wood-aged vodka, although the number of distilleries producing it is infinitesimal.

Amber has a suggested retail price of $30 for the litre bottle.
Posted by William M. Dowd at 8:45 AM No comments:
Email ThisBlogThis!Share to TwitterShare to FacebookShare to Pinterest 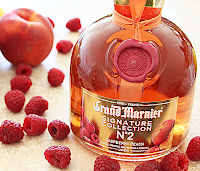 Grand Marnier is the go-to liqueur for many cocktails, and the House of Marnier Lapostolle is about to add to its arsenal.

The company plans to launch a limited edition Grand Marnier Raspberry Peach nationwide this month.  It is made with the basic Grand Marnier orange-flavored liqueur with natural raspberry and peach flavors infused.

The maker suggests not only using it in a cocktail, but simply over ice or trying a splash in a sparkling wine.

The new product will be sold in a 750ml bottle at a suggested retail price of  $39.99. It is expected to remain available through the holiday season.
Posted by William M. Dowd at 8:07 AM No comments:
Email ThisBlogThis!Share to TwitterShare to FacebookShare to Pinterest

Buffalo Trace Distillery earned a gold medal at the last year's International Wine and Spirits Competition for its 2012 Antique Collection. Late this month, whiskey aficionados will be able to sample its latest candidate when the Frankfort, KY, distiller releases its latest collection.

The Antique Collection was introduced more than a decade ago and has become a favorite among whiskey collectors. The 2013 whiskeys will be available in limited quantities starting in late September or early October at a suggested retail price of $70 each.

Once again, the collection features five limited-release whiskeys of various ages, recipes and proofs. They are:

The 2013 edition of this bourbon was distilled in the spring of 1993 and has been aging since then 19-year-old white American oak barrels.

The 2012 release of this perennial favorite was named the “World’s Best North American Whiskey” at the 2013 World Whiskies Awards. This year's release of uncut, unfiltered bourbon was distilled in the spring of 1997. It is 128.2 proof (64.1% abv), not as strong as some years. It has been stored on lower floors of the aging warehouse, which means cooler temperatures there kept the proof down slightly.

This is the collection’s uncut, unfiltered, wheated recipe bourbon. The previous edition was named the “Second Finest Whisky in the World” in Jim Murray’s 2013 Whisky Bible. The 2013 offering was distilled in the spring of 2001 and registers at 136.2 proof (68.1% abv).

Buffalo Trace Distillery is a family-owned company with a tradition that dates to 1786 and includes such distilling legends as E.H. Taylor, Jr., George T. Stagg, Albert B. Blanton, Orville Schupp, and Elmer T. Lee.
Posted by William M. Dowd at 7:37 AM No comments:
Email ThisBlogThis!Share to TwitterShare to FacebookShare to Pinterest
Newer Posts Older Posts Home
Subscribe to: Posts (Atom)