007 returns to his beery roots

The late Ian Fleming's super spy James Bond has taken on a patina of sophistication over the decades that makes most fans forget his humble origins.

In the first Bond novel, "Casino Royale," the character who became known for his knowledge and enjoyment of wines and spirits actually drank beer. (Pause here for startled gasps by those reading this sacrilege for the first time.)

The 21st and latest latest Bond flick, a version of "Casino Royale" that is true to Fleming's novel rather than being twisted into a serio-satirical comedic mess that went under that title in 1967, has a definite beer tie-in.

Producers not only have the latest Bond actor, Daniel Craig, drinking beer, they have a six-figure deal with beermaker Heineken for a promotional partnership that includes a TV commercial shot on the Bond set featuring Bond girl Eva Green.

Quite a change from some of Bond's haughtier pronouncements on what to drink.

Most of us remember his signature vodka martini in "Dr. No" -- and the instruction that it was to be "shaken, not stirred." In the same 1962 film, he turns up his nose at a 1955 Dom Perignon champagne, snootily telling his villainous host, "I prefer the '53 myself."

And now? Bottoms up. 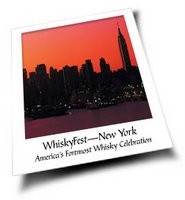 Organizers of Malt Advocate magazine's 9th-annual WhiskyFest New York, scheduled for Monday, Nov. 6, are promising in excess -- if that's not a bad word to use in this context -- of 200 of "the world's finest, rarest, and most expensive, single malt and blended Scotch, Irish, bourbon, Tennessee, and Canadian whiskies to sample in one grand ballroom."

Said ballroom is at the Mariott Marquis on Times Square for the 6:30 to 10 p.m. event. Tickets are $105 for general admission and $145 for VIP. The focus, say the organizers, "is on education, and distillery representatives will be on hand at the pouring booths to explain how the whiskies are made."

For contact information on this and other drinks events, go to Dowd's Guide to Drinks Events.

The drinks are on the ... telly

It sometimes seems as if certain cable channels run only one program over and over and over. "M*A*S*H" in its early days, "Seinfeld" and "Law & Order" now.

At least each episode had a different twist. How many could you come up with up for an all-Scotch whisky channel?

Welcome to Singlemalt.tv, the world's first Internet television channel dedicted to the single malt -- and nothing else.

Rob Draper, an Australian film producer (seen here), is working right now in Scotland shooting footage for his brainchild, planned as a 24-hour online channel comprised of news, features and ongoing series. His target is to go live with it on Friday, Sept. 29.

Charlie MacLean, a noted author and whisky expert, will be the on-camera host. Narrowstep, an Internet television provider, will be the technological host.

"By the end of 2007, all the major networks in the United States will have launched high-quality, niche-market Internet channels," Draper said in a press statement. "So far the interest has been phenomenal. We put a place-holder Website up ... and we have already shut down one server in the U.S. because it can't handle the volume of traffic coming into it."

Internet television isn't widely known or understood. In simple terms, rather than being an Internet site it is a TV channel broadcast through the Internet. Some channels are available for free, others like the Scotch whisky channel are available for a monthly subscription fee.

"I have done a lot of work on Internet television going back to 1997 and it really is the future of television and the future of Internet," Draper told The Scotsman newspaper. "We are going to do very high-quality programming and my goal is to make it intelligent programming for people who want good entertainment, want to be informed and want to have fun."

Mauritius, and its rum, being discovered

Unless you're fond of map reading, you can be excused for not knowing the location of Mauritius.

Some months ago, as a judge in the first International Cane Spirits Competition, held in Tampa, FL, I had the opportunity to sample Starr African Rum, perhaps the best Mauritius has to offer. The judges awarded it a gold medal in the white rums category (including spirits aged less than a year).

The three other gold medalists in that category were more mainstream labels -- Santa Teresa Blanco, from Venezuela; Prichard's Crystal Rum, from the U.S., and Ron Botran White Rum, from Guatemala.

My tasting notes for the event called the Starr African Rum "peppery; floral; and, with a long finish." There are hints of cardamom and citrus, all of which work well in various rum punches.

Now, Mauritius will be expanding its sales in India as part of a new trade agreement signed between the two countries. (About 70% of Mauritius's population is of Indian descent.) The agreement allows Mauritius to triple its rum exports to India.

The change is part of a steady growth in the presence of Starr African rum. It received a "Superb 90-95 (Recommended)" rating from Wine Spectator last year, then the godl medal in Tampa, and has been popping up at various "beautiful people" events at which clever PR types have been managing to link the names of show biz luminaries.

When that happens, can mainstream success be far behind?

If Heaven Hill Distilleries is successful with its fall launch of a S150-a-bottle version, then we know rye has truly made a comeback.

The Bardstown, KY, distiller has produced 32 barrels, or about 3,000 of the 750ml bottles, of Rittenhouse Very Rare 21-Year-Old Single Barrel Straight Rye Whisky, a 100-proof concoction.

Bottls priced above $30 are considered premium, those above $49 super premium. Heaven, or Heaven Hill, only knows what to call a $150 category.

Those fortunate enough to have tried the new rye report it to be bold, spicy and somewhat bourbon-like. It was selected by master distillers Parker and Craig Beam.

A true whisky club under way in Scotland

While Americans were busy resting from their work and enjoying the long Labor Day weekend, workers in Ladybank, Scotland, were just beginning a unique construction project.

Scotland's first "private club" whisky distillery (shown here in an architect's sketch) began its $1.9 million first-phase construction at a location near St. Andrews on Thursday, the project funded by subscriptions from a global network of whisky fans. (See earlier story.)

The Ladybank Company of Distillers Club was dreamed up by James Thomson, 46, who ran a whisky distilling school at Bladnoch in Dumfries and Galloway. It is located on a former farm, and is expected to produce just under 9,500 gallons a year. It is planned that the membership will be closely involved in production decisions such as length of aging and type of casking, affecting the taste of the product.

Thomson, in an interview with local media that seemed part Q&A, part anti-establishment polemic, said the idea for a "co-creative" distillery came from his disillusionment with the distilling and production practices of an industry dominated by "inflexible multinational conglomerates," and his experience of training enthusiasts in the art of distilling.

The Distillers Club is limited to 1,250 members. Participants or their heirs are entitled to six bottles of whisky per year for the next 30 years. The 300 founding members each paid a one-time $6,000 for membership. Subsequent members will pay a higher fee.

Thomson plans to produce gin and other spirits along with single malt Scotch whisky. He said the total project cost is projected at $4.8 million.