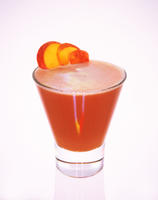 Someone once said Americans will eat anything if you color it orange. The same can be said about what we drink.

A casual stroll down the appropriate aisle of your favorite fully-stocked liquor store will reveal a variety of beverages accented by the essences -- or their chemical equivalents -- of lemons, limes and kiwis, of strawberries, raspberries and blackberries, of bananas, coconuts and vanilla beans.

But, above all, there is orange.

The exigencies of the competitive world of spirits long ago took drinks out of the boutique age of hand-crafted beverages made by backyard entrepreneurs and clusters of monks. Some do remain, but the majority of the market belongs to the big guys who do things in a big way.

Take Danisco Cultor USA Inc. Not exactly a household name, but the international food chemistry giant that has U.S. installations in New York, Florida, Kansas and Missouri is a powerful force in its competitive niche.

The idea of the Citrus Sensations line is to let drink manufacturers react quickly to market preferences -- read that "fads" -- and, thus, maintain a competitive edge.

Manufacturers simply add the appropriate Citrus Sensations flavoring to a prescribed amount of alcohol plus still or carbonated water that is 5% fruit juice. The result: a custom made, fruit-flavored alcoholic drink that can quickly be put on the market. Almost as important, it also can quickly be pulled off the market when the fad passes, thus avoiding a waste of natural ingredients in storage.

Most are orange or orange-like, in keeping with the prevailing trend -- blood orange, honey tangerine, tangelo, pomelo -- in addition to sweet Indian lime and citrus spice.

Orange-flavored spirits are nothing new. Even the most casual drinker knows about such old standards as Grand Marnier and Cointreau, and even some brands of orange bitters. They had the orange market largely to themselves for decades. But they are liquers -- fortified, sweetened liquors -- while many of today's pop cocktails are built on basic alcohols such as vodka and gin.

Because your eyes are more easily fooled than your tastebuds, you may not even be aware that drinks made with such exotic items as blue or green Curacao, for example, are in disguise. They're all orange at heart.

Curacao, you see, is the generic term for orange liqueurs of any color produced from the peel of a bitter variety of Seville oranges. Most of the fruit now comes from Tahiti, but originally grew mostly on the West Indian island of Curacao, thus the name.

That seems appropriate since the global marketplace is being supplied with orange essence from the most unexpected places these days.

Take Carmel 777, a three-year-old orange-flavored brandy from Israel (about $23 for a 750ml bottle). It's getting very positive reviews even if Israel doesn't immediately come to mind when you think brandy.

But, that is merely a start. Beer and whiskey come readily to mind when you think of Irish potables, but Ireland's Boru brand vodka is gaining a foothold in the market with its orange-infused version.

Vodka is an obvious niche for such flavors, since the neutral distilled spirit combines so readily with infused flavors of all sorts. But in the world of spirits even the niches have niches. While such popular brands as Grey Goose, Three Olives, Smirnoff, Burnett's and others seem content to tell you they use oranges, others have gotten intensely specific about ingredients.

For example, Domaine Charbay, the Napa Valley, Calif., winery and distillery, has made its flavoring source part of the name of one of its vodkas, offering Charbay Blood Orange.

Van Gogh, the Dutch vodka and gin maker, now offers Vincent Oranje Vodka, using the Dutch spelling as a nod to the artist's origins. The manufacturer makes a point of telling consumers the flavor comes from a combination of Spanish Valencia oranges and Mediterranean blood oranges.

But ready-flavored drinks aren't the whole story. The pros like to use orange juice as at least one element, if not the main ingredient, in handmade drinks.

David Tucker, at the Crowne Plaza hotel's martini bar in Albany, NY, is a good example. He has something he calls the Tootsie Roll martini, using Stoli vodka, dark creme de cacao and orange juice garnished with a chocolate Kiss.

Making drinks at home does not, of course, have to be complicated or necessarily contain hard-to-find ingredients.

The Orange Blossom is a simple, time-honored concoction I remember my grandparents' generation enjoying: 2 ounces each of gin and orange juice, 1 teaspoon of superfine sugar, shake with ice, strain into a glass and garnish with an orange slice.

A simple orange drink I came across last winter on the Caribbean island of Antigua that seemed to appeal to all tastes was the Yellow Bird: 4 ounces of fresh orange juice with a jigger of white rum and a splash of Galliano liquer, over ice.