Scotch is in their future 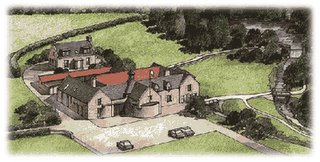 More than 300 investors have paid US$3,000 each for six bottles of single malt whisky a year for 50 years. But, they'll have to be patient before getting started.

To explain: Ladybank, a distillery that will be constructed on the site of an abandoned mill near Fife, Scotland, rounded up the first 330 backers of what it hopes will be a group of 1,250 financial supporters. According to The Times of London, the first product will be ready for consumption in 2017.

So far, $1.5 million of the $4.5 million expected to be spent has been raised. Investors also will have access to the guest rooms, dining area and library of the adjoining Ladybank private members' club, expected to be completed by 2007.

The Ladybank brochure describes the project (see illustration) as a “luxurious country club with one difference — here the activity is focused on the special mystique that is the production of fine single malt whisky.”

Founder James Thomson told The Times the empty old farm buildings at the end of a narrow track will not begin to be converted until next spring, and production will not start for another year after that.

Thomson said he envisions his members attending whisky-making classes in the converted 18th century mill or taking a stroll in an adjacent “secret Victorian garden,” with rockeries, grotto and a pond. Those especially pressed for time will be able to land their helicopters on the lawn.

Whisky production will be on a small scale, with about 25,000 litres distilled per year compared with between one million and two million for most whisky distilleries. The whisky will be shared among members and “VIP customers” with little, if any, sold commercially.