Gorilla In The Mist 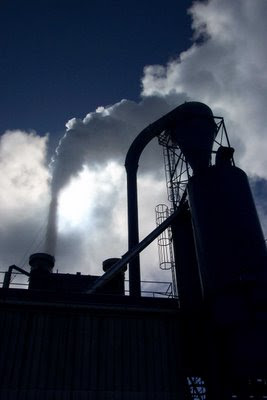 COLLINGWOOD, Ontario -- The 800-pound gorilla swirled the amber concoction around, sniffed it, tasted it, then delivered the verdict. "Well, Terry, this is ... uh ... crap," he said.

If that's the way he felt about my crestfallen colleague's efforts, there was no way I was going to let this guy sample any of the whisky blend I'd just created.

He was, after all, the master distiller and master blender for Canadian Mist, the second largest maker of Canadian whisky in the universe. I didn't need that kind of pressure.

But, let's back up a couple of days.

I was interested in more fully understanding the intricacies of the process that creates Canadian whisky (like Scotch, spelled without the "e" used in the U.S. and Ireland). Brown-Forman, the multinational alcoholic beverage behemoth, was just beginning a new campaign to push its Canadian Mist brand, so our mutual desires resulted in an invitation to visit the distillery here with several other adult beverage writers to learn about blending under the tutelage of Harold Ferguson, distiller and blender par excellence.

After a pleasant night in Toronto, it was off to this industrial city of 22,000 souls located about 90 miles northwest of the metro area. Collingwood seems the right place for such an adventure. Its legacy ranges from the sublime (named for Lord Nelson's second in command at the Battle of Trafalgar) to the ridiculous (an annual Elvis impersonator festival).

Along the way, it became obvious not many local business owners were interested in such frills as names, witness The Beer Store, Joe's Store, Steakhouse Tavern, Real Estate Office, Pine and Oak Furniture, and The Law Store.

The sprawling Canadian Mist distillery complex sits a mere hundred yards or so from the beach on Nottawasaga Bay, the southern scoop of the huge Georgian Bay that itself is nearly as large as Lake Ontario.

As we pulled onto the distillery grounds, I noticed an adjacent factory owned by Nacan, the starch manufacturer. "If these two companies worked together they could give you a good stiff drink," I mused aloud. To stony silence from my obviously humor-impaired companions, I must point out. 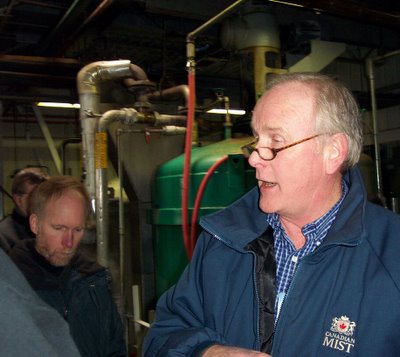 Then we were at the main door, being greeted by Harold Ferguson (above), the aforementioned 800-pound gorilla who joined Canadian Mist fresh out of college in 1969. The professorial-looking guru, with thinning sandy hair and eyeglasses perched low on his nose, is one of the best-known figures in his country's whisky business -- master distiller, master blender, vice president and general manager of the half-million square foot facility, board member of the Association of Canadian Distillers, and so on.

A tour of the distillery floor, the computerized quality control room, the barrel storage sheds and other nooks and crannies later, we assembled in an impromptu lab environment to try putting into practice some of the blending tips Ferguson had explained as we walked about.

An array of bottles containing Canadian base whisky -- essentially, a refined moonshine with a pleasant vanilla nose, Canadian rye whisky and wheat whisky, domestic sherry and port blending wines, imported rye whisky and brandy stood before us. Flanking them were beakers and Ehrlenmeyer flasks, things I hadn't dealt with since college chemistry that seemed so long ago I'd swear the Periodic Table had only about a dozen elements then.

Since Canadian Mist manufactures only one thing, Canadian whisky made of rye, corn and malt, it is tempting to think Ferguson's responsibility isn't difficult. But, as he is quick to point out, "think how difficult it is to produce the same thing every day exactly the same without any deviation." Plus, Canadian Food and Drug Regulations for what can be labeled Canadian whisky are stringent. We had to work within those regulations to come up with our particular blends.

I'd had plenty of experience infusing vodkas and gins with herbs, fruits and vegetables, but that's a comparative snap to blending whisky and all these rules don't make it any easier.

Obviously, we weren't going to click on all tries and produce great whisky. We were working with completed products that gave us a headstart, but Canadian has to be aged in "small wood" -- as opposed to large tanks -- for at least three years; contain no less than 40% alcohol (80 proof); may be flavored but no more than 9.09%, and then only by using certain substances such as those Ferguson supplied to us, and even most of them are subject to their own aging requirements.

We were instructed to mix 40-milliliter concoctions of our own tastes. I whipped up five, noting the heat of the liquids we were trying at cask strength -- undiluted by the sparkling water from the Collingwood municipal supply taken from Georgian Bay. That would be up to Ferguson to add when he passed judgment.

I began with a cautious mix of Canadian base, imported rye and port. Too hot. Then a mix of base, brandy and wheat whisky. Too cool.

It would have been nice in a Goldilocksian sort of way to report that third blend was just right. It wasn't. And, neither was No. 4.

Last chance. Twenty milliliters of base, 10 of water and 5 each of brandy and wheat whisky. Shake, sample, pray.

Which brings us back to the unfortunate Terry experience. Would my creation suffer the same fate?

Ferguson squirted some Georgian Bay water in the flask, swirled it around to incoporate my offering, held it up to the light, then sipped.

"This isn't bad," he said quietly. Another sip. "You know, this is really rather good. Nice job."

Anything after this would have been anticlimactic. A 20% success rate in my first attempt at blending. And a pat on the shoulder from the 800-pound gorilla of the Mist.

It was worth the trip. But, truth be told, I'm now retired from the whisky blending game and back to sticking herbs in my vodka. Much less pressure. 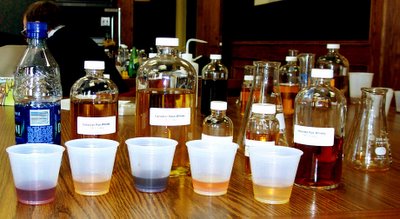 Mix the Canadian Mist with the vermouth and strain into Martini glass. Add the dash of bitters and garnish with cherry.

Combine ingredients with ice in a shaker. Strain into a glass over ice. Garnish with an orange wedge and a cherry.

Mix the Canadian Mist and blackberry syrup in a glass and stir in the lemonade and Sprite. Pour into a tall glass with ice. Garnish with lemon wheel or peel.

Mix the cherry and brown sugar in a tumbler or rocks glass, add the Canadian Mist and stir, garnish with fruit.

Shake well Canadian Mist and maple syrup, strain into rocks glass with ice and add a splash of club soda.

Shake and strain into Martini glass. Garnish with sugared ginger

Thanks for the entertaining report. You've renewed my interest in trying Canadian whisky.

Dian Fossey would be proud of your title. Sounds like fun.

Is it just me, or does anyone find Canadian whisky a bit too sweet for straight sipping?

It can be a bit sweet, and I agree it's not the best for straight drinking. However, it's remarkably versatile for cocktails. I can personally recommend trying those linked to from the story. I tried them all and liked most -- and I'm not normally a "sweet drink" person.