Belvedere in the stew over bad ad 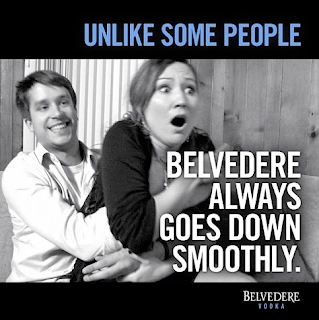 Belvedere Vodka's uber-offensive ad -- seen over there ➨ -- not only was a flop in the court of public opinion, it now is landing the company in court to defend against a lawsuit.

What is widely known as the "date rape ad" uses an actress/model's image which she claims Belvedere did not have permission to use.

Alicyn Packard's original image appeared in a still photo from a comedy skit in which she appeared for Strickly Viral Productions.

In a statement, Packard told KTLA television, "To be affiliated with an ad that's so offensive to so many has just been horrible."

Belvedere President Charles Gibb has publicly apologized for the ad, which briefly appeared on Belvedere's Facebook page on March 23, saying it "should never have happened. … The content is contrary to our values and we deeply regret this lapse."

Belvedere also made a donation to RAINN, an anti-sexual-violence organization.