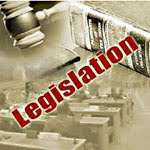 House Bill 896 passed the House on January 27 and the Senate on February 23.

In neighboring West Virginia, Governor Earl Ray Tomblin has signed legislation allowing consumers to sample up to one total ounce of liquor at distilled spirits outlets during a scheduled event, effective June 8.

The original House Bill 3174 was sponsored by State Rep. Bonnie Brown. It passed the House on February 20 and the Senate on March 10.

"Control states across the country are updating their liquor laws to reflect modern convenience and demand," said DISCUS Vice President David Wojnar, a vice president of the Distilled Spirits Council of the U.S. (DISCUS).

"We applaud governors Tomblin and McDonnell for working with members of the beverage alcohol community and passing legislation that is good for consumers and good for the state treasury, too."

DISCUS is the trade association representing producers and marketers of distilled spirits sold in the United States.