The latest news on the juniper front

Reports from newspapers in the United Kingdom address two aspects of a spirit and a drink near and dear to the hearst and palates of many. Gin and gin-and-tonic. To begin, we go to ...

• This story from the Daily Telegraph of London:

Gin and tonic, the drink which kept the British Empire lubricated, is celebrating its 150th birthday. A favored tipple of colonial army officers and cruise ship passengers alike, it is believed to be the world's oldest cocktail.

Once the scourge of the poor, the juniper favoured spirit gin had come a long way by 1858 when Erasmus Bond, a businessman produced the first commercial tonic water for sale. He based his invention on the fashion among British officers and officials in India of sweetening quinine, the bitter anti-malarial medicine which was part of everyday life in tropical climes, with sugary water -- and gin.

His "improved aerated tonic liquid" was originally seen as a health product but soon migrated from the medicine cabinet to the drinks cabinet. Rival brands soon appeared such as Schweppes, which started producing tonic in the 1870s. Synthetic substitutes later took the place of quinine in many tonic waters but the cocktail's popularity has endured. Winston Churchill once attributed it with saving "more Englishmen's lives, and minds, than all the doctors in the Empire."

After surviving the rise of rival spirits such as vodka, G&T has met a stiff challenge in recent month -- the credit crisis. A cold snap in Spain and rising food prices earlier this year sent the price of lemon spiralling.Aha! A lemon problem, you say. But, what about a much more important ingredient -- juniper berries? For the update on that item we go to ...• This story from the Welsh newspaper The Daily Post: 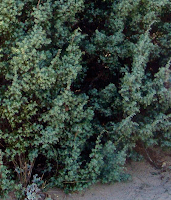 British-made gin and tonic, for many the perfect stress reliever, could be saved thanks to efforts to restore a threatened plant in North Wales.

Wild populations of juniper plants, whose berries are used to flavour gin, have fallen sharply in the last 50 years. Now botanists are helping to stem the decline by harvesting juniper cuttings from a Site of Special Scientific Interest near Prestatyn, home to around 20 old juniper bushes.

The cuttings have been successfully rooted by Chester Zoo’s botanists and members of Denbighshire County Council’s countryside service. After growing in the zoo’s greenhouses, young plants have now been returned to North Wales.

"I’m sure those who enjoy a tipple of gin will agree it’s good news,” said zoo botanist Mark Sparrow.

The juniper plants on the hillside outside Prestatyn are more than 100 years old, but the discovery of six dead bushes showed action was urgently needed. Older plants were being choked by scrub growth, while seedlings were grazed before they could establish. The new plants will be closely monitored by Denbighshire County Council which will also undertake habitat management to give the seedlings a better chance.