Getting beneath the Jose Cuervo story 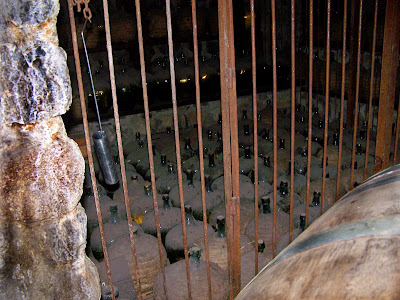 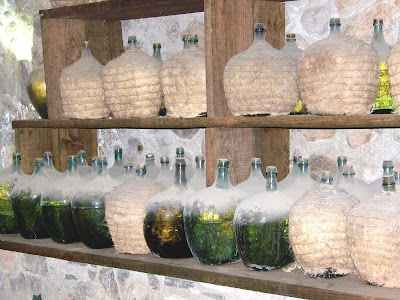 Here, in a stone cellar few get to see, damajuanas of Reserva de la Familia tequila sit undisturbed, some behind bars and stone pillars and arches since as far back as 1890.

Thick layers of white dust coat many of the containers, some of which are unadorned glass (such as the reproduction shown at right), others that have been wrapped in basket-like coverings made from agave leaves to protect against breakage. They sit in marked contrast to their newer cousins, contained outside the barred area in pristine American oak casks that have been cellared in more recent years.

This is the pride and joy of Jose Cuervo, now in its 250th year of existence, still family owned, the world's largest producer of tequila, from the inexpensive but popular expressions such as Cuervo Gold to the treasured añejo tequilas that make up the Reserva, the top of the line.

I had the opportunity this week for a private tour and tasting in the cellar, hosted by Juan-Domingo Beckmann, the 40-year-old heir apparent to the Cuervo empire when the transition of responsibility from his father, Don Juan Beckmann, is completed next year. 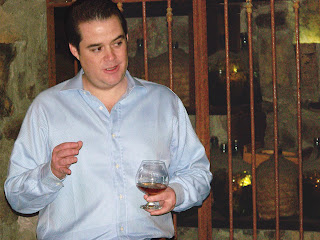 The younger Beckmann (left), an informal, affable sort who is a sixth-generation tequila maker, makes no bones about the fact tequila isn't the only spirit he enjoys.

"I'm a Scotch drinker," he said, "plus, of course, my tequilas. The profile of the Reserve de la Familia is similar to that of a fine single malt or even a cognac. That's why we recommend it as an after-dinner drink. An añejo tequila on the rocks or with a little splash of water gives me the same expression as many Scotch whiskies. It's all depends on the occasion.

"But, when you serve it is really a matter of taste, just as is your selection of what sort of tequila you like. Some people swear by the blanco, others the reposado or an añejo and won't drink any other kind."

Beckmann likes to illustrate just how tastes can be modified once someone experiences a spirit different from their usual choice by sharing an anecdote about being in a bar and overhearing a women order a vodka and cranberry juice.

"I asked her if she had ever tried that with tequila instead of vodka," he said, "She said no, she didn't like tequila. So, I suggested she try a Platino and cranberry. She loved it!"

What is Beckmann's attraction to the Reserva de la Familia?

"With this añejo, because it is finished in oak barrels, you can have the elements of both the agave and the wood notes usually found in whiskies," he said.

Before the cellar visit we had a tasting of three other Cuervo tequilas: the Platino (a blanco), the Tradicional (a reposado), and the Jose Cuervo Black (an añejo). The first two are 100% blue agave products, the third made with a touch of sugar cane.

[Go here for my tasting notes on this trio.]

Cuervo also makes the Maestro, 1800 and Centenario brand tequilas as well as Matusalem rums. Under the younger Beckmann, Maestro is attempting to usher in a new tequila category -- diamond vodka -- to go with the traditional styles. It's Maestro Dobel Diamond Tequila was released in August to select American markets.

[Go here for my notes posted after an advance tasting of Maestro last summer, and here for notes on a Matusalem Gran Reserve Rum tasting.]

While Cuervo's 250th anniversary boxed tequila set won't be on the market in the U.S. until 2009, the special tequila already has been taken from the barrel, thus meeting the 250-year marker. It commemorates the issuing in 1758 of a land grant to Don Jose Cuervo by King Carlos IV of Spain, allowing him to plant and harvest blue agave lilies for the production of tequila. Thus, the birth of an industry. 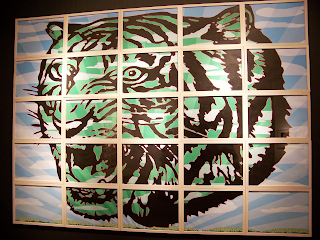 Each year, Cuervo commissions a different Mexican artist to create its special tequila bottle boxes as well as various posters and other original art. The 2009 collection is the work of Marco Arce, who has a gallery showing at LaRojeña that now is open to visitors.

Much of Arce's work is in the form of multiple-panel works grouped in triptychs, quartets, polyptychs and an occasional diptych. One of his most ambitious is called "The Tiger Series," composed of hundreds of small, hand-painted watercolors, framed in sets of four. One portion, "Tigre del Caminante," for example, is made up of 225 paintings over five panels.

Tigers are a recurring theme in Arce's work. The 25-painting installation seen above is part of the gallery display at the LaRojeña distillery.

NY Arts magazine said of this aspect of his varied works:

"Arce has created a highly surreal habitat that magically transports us, sometimes playfully, sometimes a bit menacingly, from circus to zoo to jungle. One could say that the artist also answers William Blake’s time-honored question:

'Tyger, Tyger, burning bright,
in the forests of the night.
What Immortal hand or eye
could frame thy fearful symmetry?'

Why Marco Arce, of course."